Madison Ave Construction is a leading Hempstead, NY mold removal company that has been proudly serving the Nassau County community for more than 30 years. The team of technicians at our locally owned and operated, fully licensed and insured company are experts in mold remediation. We employ the most advanced techniques, proven strategies, and state-of-the-art technologies to detect and correct mold growth, and to deliver long-lasting results. For mold remediation services you can rely on, get in touch with Madison Ave Construction!

If you’ve discovered mold growth in your Nassau County home, scheduling an appointment with an experienced Hempstead, NY mold removal company is imperative. If this is the first time you’re dealing with this problem, however, you may have some questions about mold remediation.

Why is it important? What does it entail? How long will it take? These are just some of the questions that you may be asking.

To help you prepare for the process, below, you’ll find answers to some of the most frequently asked questions that Nassau County homeowners – and you – may have about mold remediation. 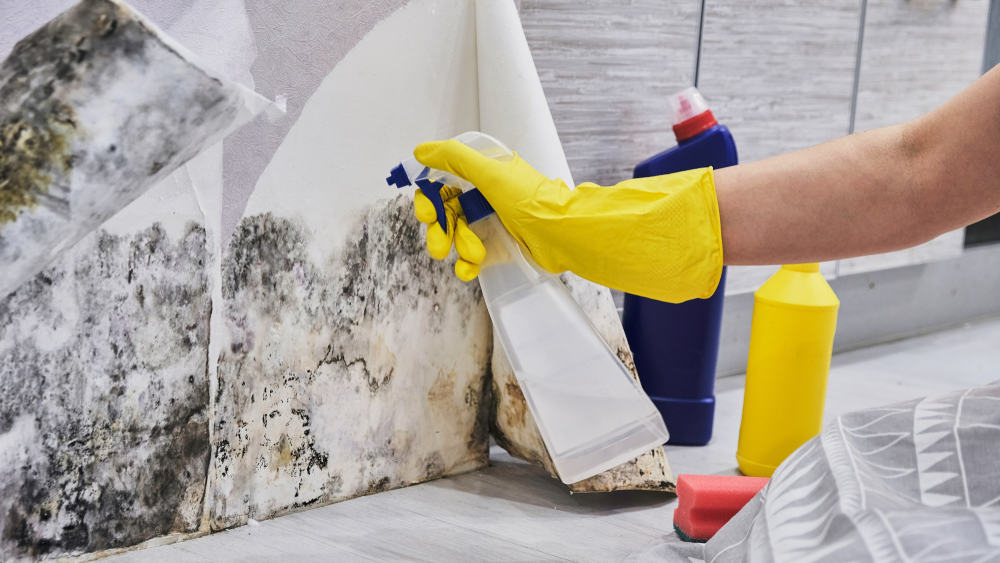 A: Mold is a type of fungus, and there are several different varieties. It thrives in moist, dark, and warm (above freezing) locations, which makes Nassau County an ideal climate for mold growth. It releases airborne spores, and as those spores land on surfaces, as long as the conditions are right, they can begin growing and spreading.

A: Not always. In fact, in nature, mold is actually quite beneficial, as it plays a vital role in decomposition. When it grows indoors, however, mold can become problematic.

Mold spreads aggressively, and because it’s a living organism, it feeds on the materials it grows on and can leave extensive damage in its wake. In severe situations, mold growth can compromise the structural integrity of an entire building.

In addition to the structural damage it can cause, mold can also pose health problems. The spores can negatively impact your Nassau County home’s indoor air quality, and breathing it in can cause cold-like symptoms and allergic reactions, and can worsen cardiovascular issues, such as asthma and COPD.

Q: Why is mold remediation important?

A: Mold remediation is important, as it eliminates the fungus, prevents it from spreading, and minimizes the dangers that the organism can cause – both to your Nassau County home and to your health.

Q: What does mold remediation entail?

A: Mold remediation refers to the process that entails utilizing a variety of strategies to kill the fungi and prevent it from coming back and spreading, repair the damage that it has left in its wake, and to restore your Nassau County property to pre-mold condition. It’s a multi-step process, and while the process varies and depends on the Hempstead, NY mold removal company you hire, typically, it involves identifying, testing, drying, and cleaning, and the surfaces that the fungus was growing on are disinfected.

A: The amount of time mold remediation will take varies and depends on several factors. These factors include the extent of the damage to your Nassau County home and the company you hire. It’s important to note, however, that while a reputable Hempstead, NY mold removal company will try to get the job done as quickly as possible, to ensure efficient, long-lasting results, it can take time, so it’s important to have patience.

Whether you suspect mold growth in your Nassau County home or you’re positive you have a problem, contact the certified team at Madison Ave Construction. Our Hempstead, NY mold removal company has more than 30 years of experience restoring the safety of residential and commercial properties, and would be honored to do the same for you! For more information, call 844-760-9303 today!

Some information about Hempstead, NY

The Town of Hempstead is one of the three towns in Nassau County in the U.S. state of New York. It occupies the southwestern part of the county, on the western half of Long Island. Twenty-two incorporated villages are completely or partially within the town. The town’s combined population was 759,757 at the 2010 census, which is the majority of the population of the county and by far the largest of any town in New York. In 2019, its combined population increased to an estimated 759,793 according to the American Community Survey.

The town was first settled around 1644 following the establishment of a treaty between English colonists, John Carman and Robert Fordham, and the Lenape Indians in 1643. Although the settlers were from the English colony of Connecticut, a patent was issued by the government of New Netherland after the settlers had purchased land from the local natives. This transaction is depicted in a mural in the Hempstead Village Hall, reproduced from a poster commemorating the 300th anniversary of Hempstead Village.

In local Dutch-language documents of the 1640s and later, the town was invariably called Heemstede, and several of Hempstead’s original 50 patentees were Dutch, suggesting that Hempstead was named after the Dutch town and/or castle Heemstede, which are near the cities of Haarlem and Amsterdam. However, the authorities possibly had Dutchified a name given by co-founder John Carman, who was born in 1606 in Hemel Hempstead, Hertfordshire, England, on land owned by his ancestors since the 13th century.

In 1664, the settlement under the new Province of New York adopted the Duke’s Laws, austere statutes that became the basis upon which the laws of many colonies were to be founded. For a time, Hempstead became known as ‘Old Blue’, as a result of the ‘Blue Laws’.

Here are some repairs-related links: